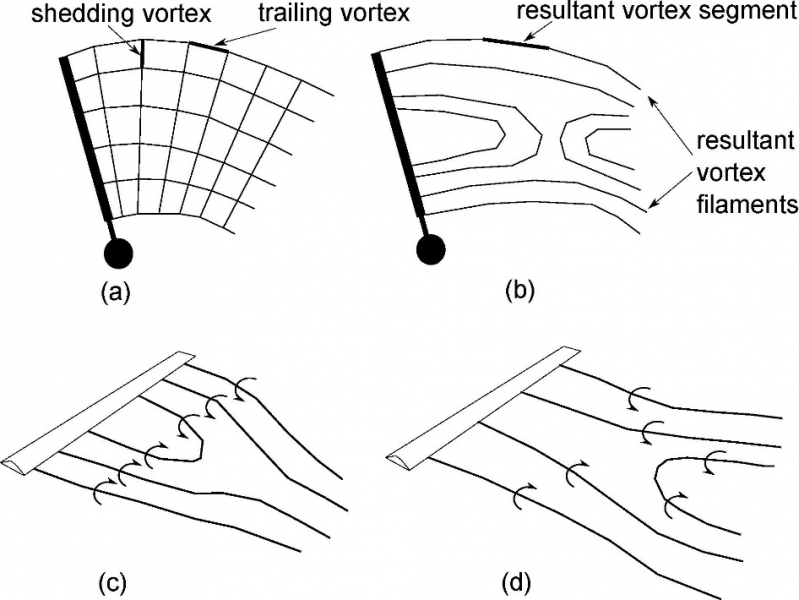 A wind turbine wake is a highly diffusive vortex flow field. Although not strictly a linear flow problem, it can be modeled approximately using superposition of elementary vortex fields. This approach is called the free wake method and utilizes Lagrangian tracking of vortex filaments as the building blocks to construct 3-D flows. Except for the wakes immediately behind blade trailing edges, the wake is characterized as a number of curved vortex filaments, which are treated as discretized entities constructed from contiguous short segments with their field properties known analytically. The positions of all the constituent vortex segment end points can be updated by using the net flow velocity at those end points.

Coupling the turbine blades to this wake requires a special treatment that is different from the discrete resultant filaments. One common blade/wake model for rotary blades is the Vortex Lattice Method (VLM) with straight segments representing trailing and shed vortices, and forming quadrilateral vortex elements in the wake. Coupled with a lifting surface representation, this method is able to capture the unsteady blade loads and accurately calculate downwash for spanwise airfoil sections. However, it requires considerable computer resource and execution time. Furthermore the lattice structure with separate shed and trailed components is awkward for an evolving free wake with substantial roll-up and distortion. 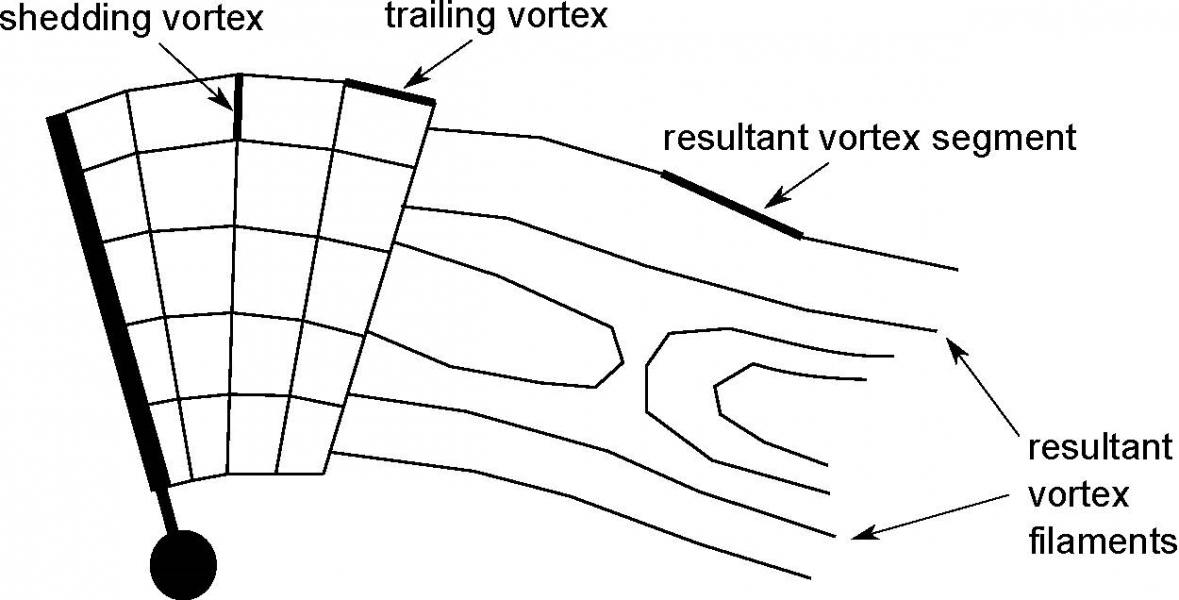 The second method is named Constant Circulation Contour Model (CCCM). This wake model adopts an advanced blade/wake aerodynamics scheme where only resultant vortex filaments appear, accounting for both trailing and shed components. It differs from the Vortex Lattice Method in the following way. As its name suggests, each resultant vortex filament maintains the same strength (circulation) even though it is comprised of a number of straight vortex segments with various lengths and smoothing. Changes in strength are allowed only between resultant vortices. The numerical artefact of a discrete grid of trailed and shed components is avoided, the wake always satisfies the vorticity conservation theorems, and the wake filaments simulate the physical vortex lines of the actual flow.  In the Vortex Lattice Method, by contrast, strengths of two neighboring vortex filaments on the same trailing vortex can be different because of the existence of shedding vortices. Another key feature of CCCM is that the number of resultant vortex filaments is subject to change due to unsteady nature of the bound circulation, leading to the creation and elimination of resultant vortices. Because of the vortex theorems, resultant filaments appear and vanish in pairs. Figure 1c and 1d illustrate this behavior.

However, the immediate representation of the wake behind blades using CCCM would affect the accuracy in calculating blade downwash, since these constant circulation contours may be unequally spaced along the blade span. The way to address this issue is to place a short vortex lattice of several chord lengths behind the blade and then to start the discrete resultant vortices from the end of the lattice, figure 2. This near-blade vortex lattice predicts local wake downwash effects accurately, consistent with the bound lattice on the blade having fixed control points. The later discretization of vortices will no longer adversely impact the blade downwash calculation as long as they are placed at the spanwise centroids of the sheet far enough behind the trailing edge. To address these issues, the present research has developed a hybrid free wake method which combines VLM and CCCM, whose schematic is shown in figure 2. The vortex lattice representation of near-blade wake assures the accuracy of blade downwash and is able to capture blade unsteady behavior associated with a tilted turbine shaft or the presence of a vertical wind velocity gradient. The transition from the lattice structure to discrete resultant vortices not only saves time because of lower complexity of CCCM than VLM, but also leads to a free wake model that behaves more naturally.